What's cuter than one fatass orange cat lounging on your couch?

Why, of course, TWO fatass orange cats lounging on your couch!

There's been a lot going on at work this week, as you might imagine from some previous posts, but nothing I really feel like blogging about. Nor is there any immediate post-academic griping I care to share.

The next "next" job, it seems, pretty much comes down to a a not unpleasant shifting of positions, so to speak: 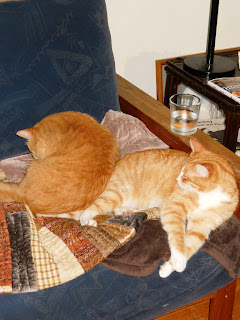 There is also a next NEXT "next" job I've alluded to cagily before. Let's just say there were some interviews a few weeks ago, a phone interview before all the Think Tank shit hit the fan and an in-person interview right in the thick of it. They went well. References were checked. And now I'm waiting. I expect it'll be at least another week or two before I hear anything. I don't want to say too much about it until I know one way or the other, but if I were offered this position, it would mean leaving New Think Tank just as it is getting its feet off the ground, something I hadn't imagined would be happening when I originally applied. And it's exciting to be at the start of a new venture, even if it's one in which my role is primarily "support." Leaving wouldn't be entirely easy ...

But, if you've figured out what the whole Think Tank shitstorm was about, you might find it interesting in a truly ironic way to note that one of the people at the in-person interview was one of the lead authors of the IPCC 2007 report. The job isn't an academic one but would involve working with academics, both scientists and humanities and social sciences people. It would, likewise, be the start of a new venture, a new initiative essentially, albeit within an existing and well-established organization. And it would mean moving beyond a "support" role.

So, one way or the other, there's much to happen ahead, new ventures both here and there, wherever I end up. We'll have to wait and see.

For now, though, it's teh weeekendzzzz!! And I intend to spend a good part of it encamped peacefully wit teh kittehs ... peacefully, that is, until Hobart decides to bite Lucky on his fat ass, which he inevitably will do, and then Lucky will smack the shit out of Hobart, which he inevitably will do, and then there's a kerfluffle ... and then everybody settles down  ... until it starts all over again.