No, I didn't take the day off yesterday to join Occupy DC for its May Day festivities in the park near where I live, but, on my way home, I did catch the culminating march from Malcolm X Park (near my house) to Lafayette Park (near the White House). Here they are marching down 14th Street, NW: 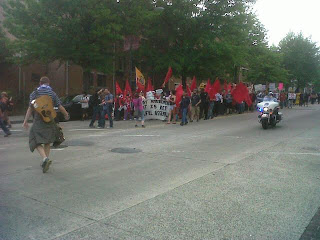 What was great about having the march go through this area was that it got local residents to pay attention. In downtown DC, there's always somebody protesting something. If you live here in Crapitol City long enough, you get used to seeing people walking around near the White House, the National Mall, and the Hill carrying signs and chanting about one thing or another. You get used to them, and you ignore them. But having a march through a neighborhood that is not a major tourist destination, especially when it's large enough to have a police escort and stop traffic on a busy street during rush hour, has a way of making locals look up and pay attention. My neighborhood is very diverse in terms of race, class, and ethnicity, and as I walked home and watched the Occupy marchers, I observed people from all different backgrounds, perspectives, and walks of life stopping -- on foot, in cars, on bikes -- and taking pictures and asking questions: "Who are they? Oh, that's the Occupy people! What are they doing here in our neighborhood? What are they chanting? What do their signs say? Where are they going? Why are they marching?"

And that's all good, I think. Maybe some of those people will go home, get online, talk to their friends, find out, and maybe get involved ... 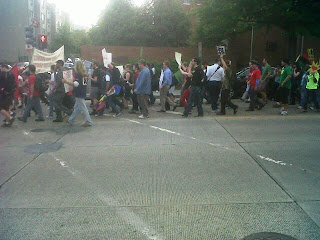