Possibly I have Lost My Critical Reading Ability?

Or, maybe, that's just me being a smartass.

Less funny is that some people, it appears, actually have lost this ability. Or maybe never had it to begin with. Or maybe, possibly, never developed it in school because they skipped all the classes taught by "liberal" English professors?

In one of those wonderful little morning missives we sometimes get in our inboxes here at Think Tank, we were treated today to some good, old-fashioned libertarian literary criticism. Kurt Vonnegut's 1961 story Harrison Bergeron (if you don't know the story, click the link and read it -- it's short), we are informed, "helps explain" why "taking from some by force of law what they have produced and consequently earned, and giving to others merely to make ìncomes and wealth more equal is not justifiable."

True, in the story,

But what the story satirizes is not a society leveled by "taking from some" to make the disadvantaged "more equal" but rather a society literally weighted down by a misguided vision of equality in which the lowest common denominator rules. People who are smarter or stronger or quicker or better looking are forced by the "Handicapper General" to mask or disable these advantages. Yet nobody else gets to benefit from these advantages, either. Nobody competes, and no one ever gets to fulfill their potential. This is oppression, not equality. It's equality misunderstood, backwards, and upside down, and this paranoid vision of equality-gone-wrong is what the story satirizes, not equality as most Americans idealize it, whatever their politics.

What role do economics and class play in this satire? Contrary to free-market interpretations going back to William F. Buckley, Jr., who reprinted the story in the National Review in 1965, income and wealth play virtually no role at all. Indeed, they are conspicuously absent. If anything, income and wealth represent the only unequal aspects of this society, as suggested as much by their near absence as by a passing line about a TV news broadcaster with a speech impediment (all the TV newscasters have speech impediments) who "should get a nice raise for trying so hard."

Historical context helps explain how Vonnegut, an inveterate political liberal, could fool so many conservative readers. Darryl Hattenhauer looks at the opening lines I quoted above in this way:


This absurd dystopia's version of equality sounds like something from the pages of popular magazines during the Cold War--because it is. Vonnegut depended on those magazines to establish himself as a writer. ("Harrison Bergeron" first appeared in the Magazine of Fantasy and Science Fiction.) Just as Twain could not have sold Adventures of Huckleberry Finn and Pudd'nhead Wilson if their sympathy with African-American characters had been obvious, so Vonnegut could not have sold a story overtly sympathetic to leveling. Instead, the Handicapper General apparently recalls the likes of John Wilkes Booth, proponent of slavery. [...] As a struggling writer, Vonnegut had to put a surface on this story that would appeal to his audience. And it did. More specifically, it did so because it appeared to rehearse central tenets of the dominant culture's ideology. It appealed to the literal-minded with such accuracy that William F. Buckley's National Review reprinted it as a morality tale about the dangers of forsaking private enterprise.

And so, conservative readers like Think Tank Senior Fellow, whose prose so freshly and eruditely greeted us this morning, continue to hold up this story as a dire warning about the end result of our nation's "liberal" efforts to promote equality. Senior Fellow writes,

Hey, dear readers! Didn't you know the reason you have an advanced degree and are working as a secretary is because you're not productive, don't take risks, and don't work hard enough? Wow! I feel so enlightened.Why didn't I think of my plight this way before? I guess I just wasn't smart enough.

Sure. I agree it would be tragic if we made the Virginia Woolfs of this world

go out and about their business every day wearing Slipknot masks: 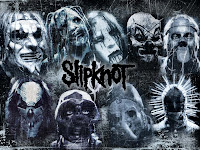 But the analogy between physical and mental "advantages" and socioeconomic ones is false. Think Tank Senior Fellow wants to believe,


As Vonnegut’s story shows, putting social limits on the success people are allowed to achieve with their own talents and abilities makes everyone worse off, because it deprives society of the benefits of their brilliance and beauty and skill and talent.

Yes, true. However, requiring people who make more money to pay more in taxes does not "handicap" them in the same way as requiring smart people to wear thought-disrupting devices in their ears, as they must in the story. Being born into privileged socioeconomic circumstances (define that as you will) opens up a host of compounding advantageous opportunities that have little to do with an individual's own talents, abilities, or efforts -- their brilliance, beauty, skill, or talent. Two people can be equally hard-working, equally smart, and equally good-looking but end up in very different places in their lives at the age of 35 because of how much money their parents had and what circles they traveled in growing up.


This definition codifies the common American objections not just to communist states, but also to socialist ones. The narrator begins with the widespread assertion that the United States not only can and does know God's law, but that God's favorite country is instituting it. (American history is replete with statements like Ronald Reagan's that his policies reflect God's will--see, e.g., his 1982 address to the National Catholic Education Association). So the narrator's definition of America's equality begins not by positing a future equality as much as exposing the misunderstanding of it in the past and present.
The narrator continues to give not a possible egalitarianism of the future [...] but rather an enactment of how absurd society would be if egalitarianism were what America's dominant culture thinks it is. The narrator defines equality only in terms of intelligence, looks, and athletic ability. There is nothing about kinds of intelligence, or how it is used. Similarly, beauty includes only the human appearance; there is nothing about painting, architecture, etc. The first two concerns, intelligence and looks, address two of the traditional categories of philosophy: the true (epistemology) and the beautiful (aesthetics). The third category, the good (ethics), vanishes.

What truly perplexes me is not Think Tank Senior Fellow's superficial reading of the story but the failure to grasp the significance of that absence of ethics from the story's representation of "equality." TTSF continues:

But doesn’t the Declaration of Independence itself say “All men are created equal,” and isn’t equality a fundamental American ideal? Yes, but these expressions invoke a concept of equality different from the social justice concept of equal incomes and wealth for all. The original and traditionally American concept of equality is “equality under the law.” That means the same rules apply to all, not the same results.

First, most progressives (I guess I'm speaking for myself here, but correct me if I'm wrong) are NOT saying equality SHOULD mean equal incomes and wealth for all. That's just blatantly false.

But, more importantly, we've had "equality under the law" since the Fourteenth Amendment was adopted in 1868. On February 26, 2012, Treyvon Martin was shot dead. His killer walks free. Before we can talk about whether the same results should apply under the same rules, we should first consider whether the same rules DO apply to all, just because the law says they do.
Posted by recent Ph.D. at 6:19 PM