Random Observations from Inside the Belly of the Beast, Part II

Last year, I blogged here about having to attend a certain super conservative conference when I was still very new at Think Tank.

Back again this year, not a whole lot had changed. I still found it ironic that I had attended an MLA conference here at this same hotel a number of years ago. There were still women walking around in heels way too high to wear to a conference of any kind (it's a bad sign when you can tell they're having trouble walking yet still trying to be sexxy -- and since when are 6" heels "conservative" anyway?), security was still ridiculously tight (they wouldn't let me into the exhibit hall to go to Think Tank's booth to pick up my badge because, well, I didn't have a badge! Had to call someone to bring it), and the crazies were still abundantly present. Here are some questions of deep significance conference attendees inspire us to ponder:

Shall we build a time machine and return to the America of the 18th century? Things were just so awesome and revolutionary then! 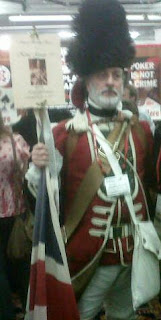 Maybe Google will help with the software for that time machine. Hey! WTF is Google doing here? Whose side are they on anyway? Lest you thought otherwise ... 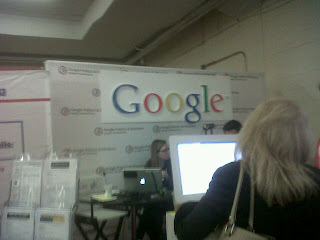 What can furries teach us about being conservative in the 21st century? 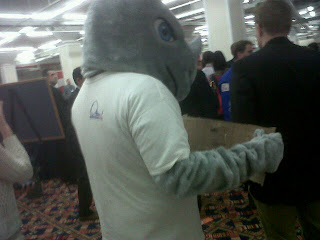 And one of my favorites, an impromptu performance that initially generated righteous outrage and hostility: "What, are those motherfucken hippies I see? Oh, I fucken HATE hippies!! Where are the cops? How did those Occupy shitheads get in here? Where are the cops? I'm just gonna go beat the mess outta those dirty sons-a-bitches!!!" 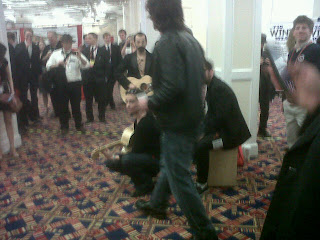 Actually, while the cops did appear soon enough, these guys were "legit" (See the badge hanging off the one sitting on the box?) and were singing, in the style of hipster troubadours, about how "America was great/Before we all had to hyphenate." You know, like, African-American, Latin-American, Indian-American -- when we were all "just Americans"!!

What would all these "Americans" (mind you, once again, I could count on one hand the number of nonwhite attendees who passed by Think Tank's booth over the course of about 6 hours) have done if the "Occupy shitheads" had gotten in and glitter bombed the place, as they were threatening to do? Oh, I was sooooooo hoping to witness that! Well, except for the large presence of NRA supporters also in attendance. Except for a few minor disturbances, for better or worse, the Occupiers mostly stayed outside. 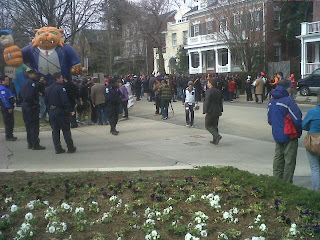 For fuller coverage, go read what Wonkette has to say. Their people actually attended the speeches and events and whatnot, which I did not. Go here or here. Or even here! Go on, you owe it to yourself to check out those links!!


*     *     *     *     *
Meanwhile, things have settled down back to normal here at the office, after all of last week's excitement. No shortage of protesters, though. Should we free Tibet? These people, seen today from my office window, think we should. 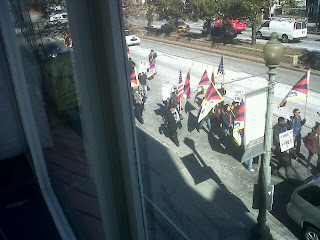