On Style (Outside Academe)

No, I'm not talking about clothing (though I did have some fun at the mall this weekend). Rather, when it comes to style guides for writing, whether you are inside or outside academe, the rule of thumb to remember is consistency.

Inside academe, when I taught students MLA style, I would always caution them that not all disciplines used MLA style, that they'd have to accustom themselves to whatever style guides were favored by their majors.

I should have said something about the nonacademic world, too.

The other day, Think Tank had a meeting about style. Apparently, that's a problem here in all kinds of different publications, publicly circulated documents, and funding proposals. People are inconsistent. They don't pay attention to simple things like getting the office address correct. They write like they talk. They abuse punctuation. They represent Think Tank as a "we" rather than an "it."

So, Chief Editor and some others put together a Think Tank Style Guide, a manifestly entertaining pastiche of Chicago Style, AP Style, and Think Tank stylistic idiosyncracies boldly defended as "the right way."

Aside from the mildly irritating fact that nobody gave a damn what I had to say on the subject (go figure), they did have a point about consistency. Really, since Think Tank is not an academic institution, the academic style guides are not always appropriate, and, likewise, since it is not a press organization, AP style is not always best. So, it makes sense to come up with a guide that is neither of these things but yet reflects the needs of the organization in terms of public image and voice and at least encourages consistency among the large numbers of people who write within the organization for a wide variety of outlets and contexts.

While I don't necessarily agree with all the "guidelines," I'm willing to go along with them for the sake of consistency. Here's the thing, though: I don't actually write here. I just edit, mostly just Think Tank Boss's work. And Think Tank Boss, according to Chief Editor, is one of the worst offenders, a problem that often crops up among good writers who have a distinctive voice and don't want to sacrifice saying what they have to say in the way they want to say it to the demeaning imposition of stylistic regulation. I can edit TTB's work for consistency out the wazoo, but, if ze chooses hir own style rather than Think Tank style, ze will simply reject my edits.

Which is fine. Ze has the right to do that. But, where does that leave me as the editor? Chief Editor (and the rest of them) will think, "How can you have a Ph.D. in English and be too stupid to follow a style guide?" TTB should have attended the style meeting hirself.

Moreover, when you think about it, no matter what the context, Think Tank really is an "it" and not a "we." Usage of "we" is a powerful tool that establishes a writer's ethos by uniting hir voice with the authority of other voices. But in what context is this appropriate? There are always exceptions, but, generally, as far as I can tell, situations here at Think Tank with a rhetorical imperative to violate this rule are rare. Logically, only in those situations in which the entire organization really is speaking collectively or when Think Tank partners with other groups and all the groups together form a "we" should writers employ this pronoun.

Harruuuumph. I think Grammar Girl would have something to say, too. 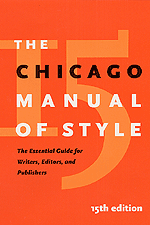