Yesterday, Peaches and I were enjoying a nice day of hiking (basically, where our "staycation" ended up) in Shenandoah National Park. It was a bit misty: 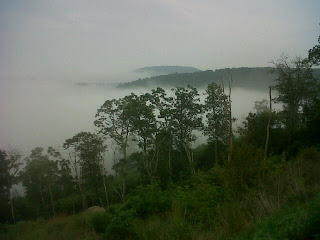 I took that one out the car window at one of the "scenic overlooks" along Skyline Drive, but the clouds and mist kept things reasonably bearable (pun intended) on the trails on what would otherwise have been a too hot day.

The deer even came up close enough to photograph: 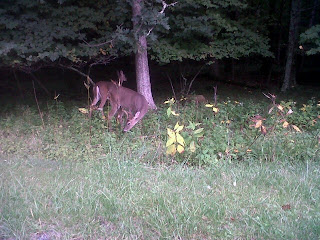 I know you rural and even suburbia people aren't that excited about deer (they eat your geraniums and whatnot), but they're a novelty for us city folk.

Another, slightly scarier novelty of woodland critterdom, of course, are the bears, black bears, to be specific.

As we were hiking back along a lonely stretch of trail, we were nearly scared out of our wits when we SAW ONE, NOT TWENTY FEET AWAY!!! He (or she) was in the woods, just off the trail to our right and was looking right back at us!!!

Oh, you know for sure I'd have a picture, but we weren't sure what to do and getting the heck away from there as quickly as possible, before that bear got any ideas, was what we did.

Too bad, because as it turns out, black bears are rarely dangerous to humans. Here is a visual:

I didn't take this picture, but the bear here looks very much like the bear we saw. Scary, no? But I guess, they're not prone to attacking ... next time, I will take my own.

The feeling of looking at another creature like that, though, sizing him up as he does the same to you, one animal to another, is something pretty spectacular. You don't have any particular advantage for being human, especially if you don't know anything at the time about the other creature's habits and behavior ...

Faulkner, in that great and terrible tale about the bear and the boy, puts it this way:


Then he saw the bear. It did not emerge, appear: it was just there, immobile, fixed in the green and windless noon's hot dappling, not as big as he had dreamed it but as big as he had expected, bigger, dimensionless against the dappled obscurity, looking at him.