A Species That Ought to Go Extinct

Today was the first day of the "Global Warming Is a Myth" conference, the preliminary arrangements for which I blogged about way back here.

A few observations from sitting at the registration booth today:
And the polar bears?


Well, their plight is real, but to Climate Skeptics and Global-Warming-Is-a-Myth-Super-Science-Radical-Experts, polar bears merely perform as Endangered Animals. Just another category of losers in the Grand Narrative of Man's Dominance (except, don't forget that "Man" isn't responsible for Global Warming -- only God could manage that!). 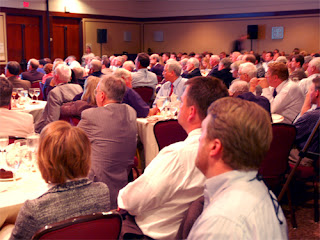 Talk about dinosaurs! It's easy to embrace the extinction of others when you -- through some bizarre maneuver of cognitive dissonance, an internalized and never-questioned capacity for mansplanation -- remove yourself categorically from all potentially vulnerable species.
Posted by recent Ph.D. at 5:56 PM