Halloween was on a Monday that year, like this year. All the parties had been over the weekend. Lots of people I knew had gone to a rave called Glow on Saturday night. It was out on a farm in the middle of nowhere. We danced until the sun came up and our phat pants were caked with mud up to the knees. I remember riding back to Undergrad Town in the back of someone's pick-up truck -- packed in with two other people lying flat under a tarp ...

Monday night, mostly fully recovered, I was pacing around the courtyard outside the dorm smoking a cigarette and thinking about the paper due the next day that I didn't want to write and had yet to start.

"What's Arbutus?" I asked. Mike was more an associate than a friend. He was a shady character, a music major who sat last chair second violin and showed up to rehearsals, like regular classes, ... rarely. He shared a last name with a famous beatnik poet and claimed to be related. Total bullshit. Pretty much everything about Mike was total bullshit, except that he seemed to know a lot of people, and if there was something going on in the local underworld of 1990s rave culture, he knew what it was and where it was. And that was pretty much the only reason I associated with him. My mistake.

"Arbutus," Mike said, "is a special place. You'll just have to go there to find out."

"I have a paper to write," I said, "Where exactly is this place?"

"Just write it when you get back. Come on!" And he was already heading off campus ... towards the bus stop. Why was I following? It was already 7 PM. My paper was due before lunch the next day. But I kept following. It was Halloween, after all. Who wants to write a paper on Halloween?

We got on a city bus, all bright lights with the darkness blanketing the outside around us﻿. I recognized where we were going at first, but then we headed off down an unfamiliar road and drove on and on and on for almost an hour. I had no idea where we were. In the suburbs somewhere, but I wouldn't have known how to get back.

The bus was relatively empty. A few people got on and off here and there. Mike was chattering nonsense for a while. He picked up some papers on the floor that looked like some poor kid's handwritten homework and was reading it aloud, making fun. Then he took out his lighter and acted like he was going to set the papers on fire until the bus driver yelled at him. I was already regretting coming along ...

Eventually, we got off at an intersection that Mike seemed to know. We walked about a half mile in the dark along a road without sidewalks and up to a house.

"We're picking up Mike," Mike said. "And then we're going to Arbutus."

"Who's Mike?" I asked. "And will you please tell me what Arbutus is?"

"We're almost in Arbutus," Mike said. It turned out the other Mike was somebody I'd met before, a harmless enough kid, tall and lanky with sad eyes sunken in their sockets. I think he was still in high school. The two of them smoked some pot, and then all three of us left the house and walked for another mile or so. It had started to rain. At some point, we crossed a street, and Mike announced we had reached Arbutus. It was just the name of a suburb.

A few blocks later, we walked up to a house. The light on the front porch was on and some people, raver types, were standing around smoking cigarettes. They waved us in, seeming to know both Mikes. They looked vaguely familiar.

Inside the house, someone was spinning records, something with a house-y beat. Incense burned. People, maybe 12-15, sat around on couches talking. Mike sat down on the floor by the coffee table and took out a sketch pad. The other Mike went over to talk to the people spinning records.

I parked myself on the couch near the door. I had my backpack with me, which contained the books I was supposed to be writing my paper about and a notebook. It was after nine already, and I figured I'd be stuck here for a while. Some party! I toyed with the idea of starting the paper. Whatever I wrote here I could always revise and type up when I got back.

I lit a cigarette and thought about what I wanted to say ...

All of a sudden, the front door, just to my right, burst open.﻿ Three men stormed in. Their boots shook the floor. Their voices drowned the music. All I saw were the guns pointed, it seemed, at our heads.

"FREEZE!!!!" commanded an authoritative voice. "Put your hands over your heads AND DO NOT MOVE!!"

I felt a surge of adrenaline and, shaking, put my hands over my head. The notebook was still in my lap.

They had entered through the front door. Several more had come in through the back. They all had their guns out, pointed at us. All I could see were those guns. We sat motionless. Several of them, stationed strategically around the room, kept us at gunpoint. The rest tore apart the house, searching drawers, closets, cushions, the panels in the drop ceiling -- every conceivable place.

The police had a search warrant, it turned out, for the three tenants renting the place. I didn't know any of them, but, allegedly, they had been selling ... stuff. The cops had been watching the house for some period of time, figured they had enough evidence, and must have assumed Halloween﻿ would be an ideal time to catch these Evil Drug Dealers in the act.

All they found, after all that searching, after scaring the living SHIT out of most of us (out of me, anyway), was some paraphernalia. It was a Monday night, after all.

But ... they weren't finished yet. Having searched the house, it was now time to search each of us individually. First they went through our belongings, backpacks, purses, and whatnot, while they questioned us.

"What's this?" the cop searching my bag asked, eyeing me suspiciously as he examined, one by one, each cylindrical wooden piece that had been nestled in a padded case.

"It's a flute, a baroque flute. I'm in the early music ensemble," my nerdly self said. I also had sheet music in my backpack to prove it, too. "Do you want me to play?"

He put it back, looked through my books and folders and notes, and found nothing. In my wallet, he found my ID for Undergrad U.

"You go to Undergrad U?" he asked. I nodded. "Do you have a scholarship?" I nodded. "You do know that your scholarship will be revoked if we find anything on you? What's a nice kid like you from Undergrad U doing here with these dummies?"

I looked at him blankly. He didn't find anything.

You'd think it would be over after that, after they searched the premises and each individual﻿ person and found nothing of consequence. But no. Things got even better. You'd think having several guns pointed at you would be the worst of it. But no. It was Halloween, after all.

Sometime around 11 o'clock, they decided they needed to strip search us. All of us. I'll spare you the details, but, one by one, we each went into a room with an officer. All of the original cops were men, but they called in a female to search the women. We had to take off each article of clothing, underwear included, and hand it to the cop, who, wearing latex gloves, examined it thoroughly. The process took about three minutes. If they found nothing, you put your clothes back on and went back to the room where everyone else was to wait until whenever it was they decided this horrowshow would be over.

Sometime after midnight, I was allowed to leave. They kept Mike, the last chair second violin (I had lost track of the other one), for further questioning (he had been mouthing off a bit once he figured out they weren't actually going to shoot him), but the buses had stopped running anyway. I got a ride back to campus with a crazy kid who talked to aliens and thought I wanted to know all about what they told him. He was 20, he said, but wasn't in school.

He worked full-time in a lab.

Being strip searched at gun point ... that does take the cake for frightful nights. I'd rather write a paper any day, Halloween or not!!

In retrospect, I can't say the experience haunts me in any particular way. After all, it turned out OK. But there is something deeply disturbing, grotesque even, about the threat of violence -- deadly violence -- in contrast to the actuality of the circumstances.

Because ... whatever the suspicions were, whether founded or not, no one at that party was armed. No weapons were ever found. In the end, they even let Mike off, despite his big mouth. No one was arrested.

And yet, they were POINTING GUNS AT ALL OF US. Presumed guilty until proven innocent?

It's not a feeling you ever quite forget ... 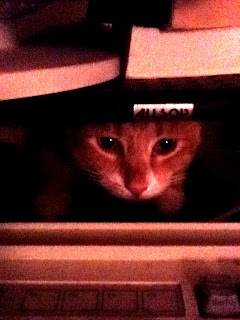 Hobart sez, "Are you finish wid teh scary stories? I can stop teh hiding? I can haz kandy now??! Happy Halloweeeeeeeenz, my peeplz!!"