Eh, the title was a warning you were going to get another image like this one. So, if you clicked and are now disgusted by this new one I almost stepped on today, it's your own fault: 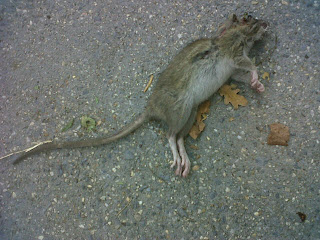 Really, I don't know why I am taking pictures of dead rats and posting them on my blog. This latest one I'm finding even more revolting to look at than the first one I posted. I think it's bigger. It was only about half a block from where the other one was, and I'm going to get to watch it decompose all week unless I take a different route. Just like the other one.

Is there something metaphoric here? The first time I blogged about a dead rat, I wrote that, having left academe, I was finding myself looking down at grim, ratty reality rather than up at academe's idealistic fantasies and self-aggrandizing delusions er self-deceiving fictions or  -- what is the phrase I'm looking for here? Hairy ass Life of the mind or something like that...??

But, really, academics are no less subject to the rat race than anyone else. If anything, more so. Run run run run run. But where are you running to? A tenure track job? Heh. Not if you don't already have one. Promotion? Sure, go for it if you're already tt -- but, really, if you're tt, do you have a choice? And while tenure and promotion will certainly make your life at least a little better in terms of salary and job security, what about the future of the profession? In the long run, if those who have tenure now don't work harder to use the privilege of their position to both preserve and reform the profession, there won't be anything but adjuncts a generation from now.

There's been a lot of buzz this week about William Pannapacker's latest take on fixing graduate school in the humanities. (go to my previous post for the link if you haven't read it already -- I'm too lazy to link again), especially about how the "satisfaction" of doing work you like is supposed to compensate for exploitation -- for using people for scut work and then disposing of them before they've had a chance to prove their merit, for taking advantage of their over-motivated willingness to do "satisfying" work for a pittance only to close doors as soon as they've earned the credentials to walk through them, for being worse in so many ways than the rat race so many graduate students think they're escaping through the Ivory Tower.

So often when I think of academe these days, I'm reminded of the title character in Ellison's Invisible Man. Specifically, I'm reminded of the scene in the first chapter when he dreams about his grandfather and the briefcase with the sealed letter, supposedly a letter of recommendation. His grandfather tells him to open it. Inside there's just another sealed letter. He opens that one. And there's another. Eventually, he opens the last one. It says, "To Whom It May Concern ... Keep This N----- Boy Running."

And, if I've run too far astray from rats, there's also the opening scene from Native Son, in which Bigger Thomas kills the rat in his family's apartment only then to use its corpse to torment his sister:
The meaning? Let me quote from one of our students' favorite sources for explanification of those awful, mean, tough, long books we (in my case, used to) assign:


Symbolically, the rat is as "trapped" in the apartment as the family is; both are eating nutritionally deficient "garbage," none may escape and both are ultimately vulnerable to vicious murder.

Well, OK, so I'm exaggerating. Of course, it isn't as bad today to be an aspiring academic as it was to be black and poor in mid-twentieth-century Chicago. But you get my point.

Academe traps us like the rats that inhabit so many decrepit grad student basement offices (and I've seen 'em, too -- big fat ones that stink when they die under couches and no one notices for a few days).

Until you realize you're a rat and there's nowhere left to go but out.