Meet Pynchon the Back Porch Opossum: 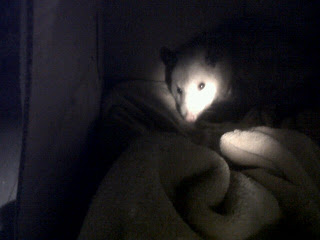 Sorry you can't see hir that well. It was dark. What's the story? Well, when Peaches and I moved into this house, there was a colony of feral cats living in the alley. Various people, including us, used to feed them, and we also put some cat furniture out on the porch so they could hunker down when it got cold or rainy. One of the cats, Inky, preferred cardboard boxes to cat furniture, and so we've always kept a cardboard box with an old blanket in it out there for him.

Fast forward a few years: Most of the colony has died off. The most recent one to go was the cat pictured on the right in this post, who finally decided late in life that being an indoor cat wasn't such a bad deal. Inky and one other are the only ones left outside, but the furniture, along with Inky's box, are still out there. And we still put food out for Inky and his pal.

A few months ago, lo and behold, I looked outside after I had put some cat food out, and this big, ugly, ratlike critter was slobbering all over the cat food plate. Then ze put hir snout in the water bowl and slurped up every last drop. And then ze looked at me plaintively, as if to say, "Hey, can I have some more?"

And ze appears to have taken up residence in the cardboard box, as pictured here.

You know the old song about the cat that came back and wouldn't stay away, who was "sitting on the porch on the very next day"? (see alternate chorus, but the lyrics in the original, at least according to this Wikipedia article, aren't what I remember hearing growing up) Substitute "possum" for cat and that's what I'm dealing with.

Now, lest you think I am fool enough to deliberately continue feeding a wild animal, I will say this: After all these years, I consider Inky and the other feral cat my pets, even though they won't come into the house. I cannot not feed them, and they do use the shelters/furniture. But, the food and shelter also attract this screwball opossum (I'm pretty sure there's only one). When I put food out, the cats always eat first, but, when they're done, Pynchon comes over and slobbers over the scraps and water (I'm assuming ze has other sources of food because I certainly don't put out extra for hir). And then ze holes up in the furniture. The cats ignore hir. Inky has relinquished his cardboard box for more appropriate cat furniture, though I've also seen the possum in there, so simply getting rid of the box won't solve anything.

So, what am I supposed to do? I try chasing hir away with a broom, but ze comes back as soon as I go inside. Possums -- I looked this up -- are not dangerous. They are, in fact, totally non-confrontational and will not attack other creatures, including humans. Their response to aggression is just to runaway or play dead (hence the expression "playing possum") rather than to fight.

And so I'm stuck with an opossum. I've named hir Pynchon because I'm tired of calling hir "the possum" or "it," and "Pynchon the Possum" has a nice ring to it. And it's just utterly and absurdly postmodern to be living in a city -- as opposed to out somewhere in backwoods Bumblefuck -- and putting up with a stubborn, somewhat reclusive opossum on your porch.

Email ThisBlogThis!Share to TwitterShare to FacebookShare to Pinterest
Labels: animals