Because I Don't Have Anything Else to Say Today, and I'm Tired of Looking at My Last Post

Here's a picture of a relatively young Edward Albee and his cat "Boy": 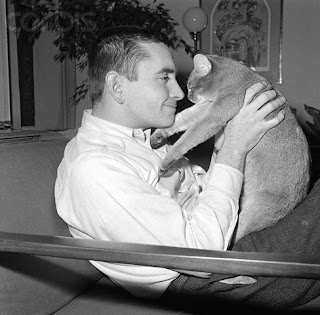 Image: NYC 1963, photographer unknown
Thanks to Peaches for sending me to this site yesterday, where there are all sorts of famous writers and their cats, but Albee is absent. Yet his plays about animals, human and otherwise (The Zoo Story, Seascape, The Goat Or, Who Is Sylvia?), do certainly suggest nonhuman creatures inspired him. "We are all animals, are we not?" he inquires provokingly in an interview. Here's another picture: 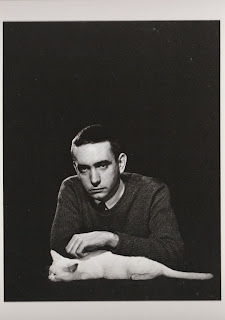 Image: 1961 photo by Philippe Halsman
I don't know where this particular species is in Albee's work (there are dogs, giant lizards, and a goat but no cats I can think of, at least not prominently featured), yet so many writers seem to have found cats as their muses, one wonders what great works would be lost if it weren't for these manipulative bastards charming and adorable creatures?
Posted by recent Ph.D. at 4:26 PM