Alas, I never got to wear mine to MLA interviews either this year or last, but my suit has been getting some wear nonetheless.

I don't look nearly as classy in my suit as a tough old broad might, or as good as this savvy youngish one does:

But my suit has done well at swathing my boredom at this morning's event on Cupcake Heap:

Snoozing at the registration table as the well-heeled scuttled past through the Corridors of Power, I joined the caterer (also snoozing until it was time for lunch) and the homeless people lining up, paid to be placeholders, for the event following ours. I wouldn't have minded listening in to What Was Said Behind Closed Doors, but I had to hand out programs and collect business cards.

Actually, the event wasn't so secret. No one was trying to hide anything. We publicized widely, and the press was invited but didn't show -- and so no one will know what was bought and sold: 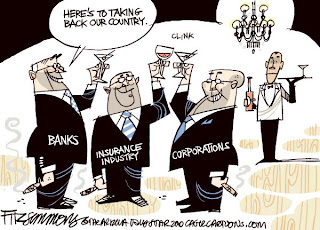 So, readers, what's been the fate of your MLA interview suit?
Posted by recent Ph.D. at 3:48 PM