Alas, my phone camera does not do justice, but, all in all, ﻿we had a good show last night. One song trainwrecked towards the end, but we rescued it and no one in the audience seemed to notice. Fifteen minutes before we went on, the place was empty, and we were expecting to play to about five people. But then something happened, and by the time we were ready, the house was packed! Here are some pictures, although, of course, by design, pictures of people are limited and insdistinct. Mostly inanimate objects willl have to tell the story.
Peaches took this one during the show, which somewhat illustrates how we pack a stage (not even everyone is in the picture): 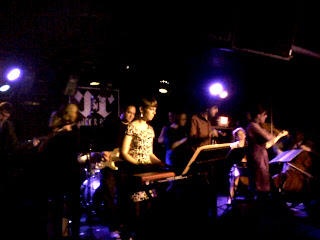 ﻿Backstage, Chairman Mao with jaundiced eyes peers down. I'm not sure what his message to musicians is supposed to be, but he always reminds me of Dr. T.J. Eckleburg from The Great Gatsby, gazing from his billboard out across the Valley of Ashes: 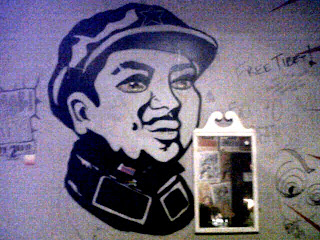 The picture here doesn't do justice to the color of this old chair, which is much more golden and plush textured, although still -- how shall we say? -- full of "character" that comes only with age and abuse (you may well wonder, as we did, what's been done to and on this furniture -- and then you might wisely think better of it, especially if you are ensconced in it yourself). Picture somebody with a guitar sitting here, as many with many different guitars have: 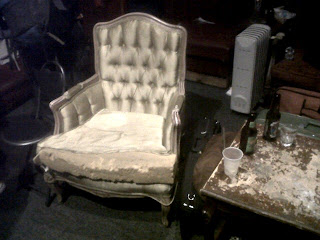 The party was mellower than Halloween. No absinthe: 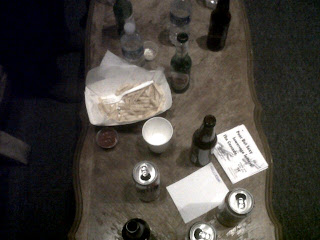 And these towels ﻿were a new addition. Perhaps for those who get extra sweaty onstage? I can't figure out what else they're doing here: 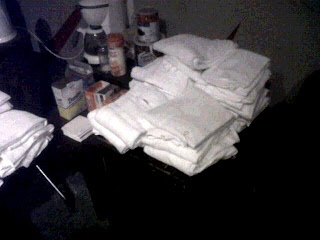 ﻿
Now, this wall is full of color, and I'm disappointed how poorly the camera picked it up. The posters are full of dark yet bright details that offer a happy contrast to Chairman Mao's somber gaze. Someone with a real camera took a picture for me, which I'll post if he sends it. The couch underneath is a muted red velvet. Picture too many people sitting on it, laughing, holding insturments and drinks, a violist putting her make-up on as she tries to convince one of the boys he should wear a tie AND some eyeliner... 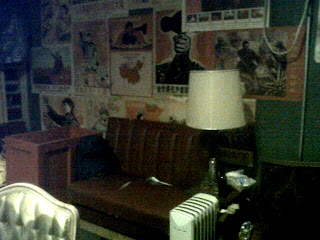