"We still believe in pirates. Do you?"

My last day as Operations Director of New Think Tank is this Friday, July 13. We held my farewell lunch yesterday, though, since New Think Tank President will be out of town most of next week. ﻿
At lunch, my successor asked what I would most miss most about leaving. Now, I am not a huge fan of such questions, reasonable as they may be. This falls in the same category of questions as "What is your favorite book?" Of course, you can always come up with some kind of answer, but it's always a bullshit answer. So, I gave a sort of bullshit answer that may perhaps have disappointed people who may have cared about what my answer was.
Becauses, of course, there are silly things I will miss (a desk in a former art gallery by a floor-to-ceiling window with an awesome view) and silly things I won't miss (taking out the trash). And I could, of course, add onto these lists ad infinitum, but what would that really tell you? Not much.
Instead, since they say a picture is worth a thousand words, I offer you one of the coolest pictures ever: 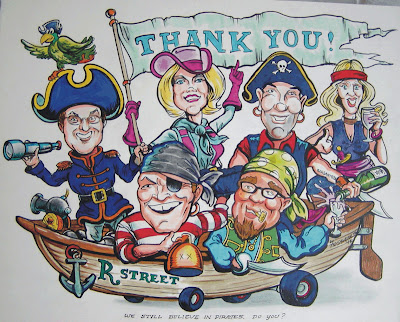 New Think Tank President commissioned an artist friend of mine to draw this pirate-themed caricature of the New Think Tank team as a gift to the donor who made it possible for us to split seamlessly from Old Think Tank and start up New Think Tank after the Great Scandal of May 2012.

On the far left is New Think Tank President depicted as the pirate captain. On the far right with the red bandana is me. And on the bottom right with the glasses and beard is the person I've occasionally referred to here as "Other Colleague." The other three are directors of New Think Tank's offices in Ohio, Texas, and Florida.

The guy with the eye patch is -- ooooooooo! evill!!!! -- a former executive director of ALEC who has never been anything but polite, respectful, and an all-around cordial and colleagial person to work with, which is pretty much what I can say about EVERYBODY at New Think Tank and, sadly, a lot more than I can say about more than a few people I knew in academe. While some of my liberal friends (who have often wondered how I could "stand" to work where I did for as long as I have -- WTF people!??!!?) might cringe to hear me say it, I'd rather work with nice people who vote differently than I do than asshats who claim to share my politics but hypocritically reinforce an exploitative and destructive class system in their own workplaces and profession.

(Ahem ... Yes, Academe, you and some of your loyalest servants still piss me off.)

Pirates are sort of a theme around here. I won't go into details, but, suffice it to say, I like working in a place where, unlike in academe's lower ranks, you get to make up your own rules, chart your own course, and keep the treasure you acquire along the way.

That piratical spirit, shared by all of my New Think Tank colleagues, is what I'll miss most when I leave.

But, fortunately, I don't think I'll be entirely leaving it behind. If you look closely at the picture, notice the text at the very bottom. You might have to enlarge your screen to see it, but it's an inside joke of sorts. If you figured out what the Great Scandal of May 2012 was about, you'll get the joke. Even if you didn't and don't, appreciating the spirit of it is enough. The text says, "We still believe in pirates. Do you?"

My answer: Yes, friends, always and forever! Once a pirate always a pirate!! And the best adventures, for me and for you, are yet to come!!!
Posted by recent Ph.D. at 1:27 PM

Email ThisBlogThis!Share to TwitterShare to FacebookShare to Pinterest
Labels: new job, next "next" job, pirates, politics