I don't have much to say today, but since I try to post at least once a week, I figured I owed you something today, since it's been a week since my last post.

It's actually been pretty busy around Think Tank Land lately. We had an event on Crapitol Heap on Monday, which always involves planning and coordinating, but it seems like there's been a lot of other stuff to do, too -- booking travel, finding a new office space to lease, and just ... general officey nonsense that takes up time but doesn't lend itself to snarky blog posts.

My mom is also arriving in town today for a visit, so, outside of work, I've been cleaning my house (which involved also treating teh kittehs for fleas -- we gave them both baths twice!!) and trying to figure out stuff to do with her. My mom and I generally get along better with weekly phone conversations rather than with regular in-person visits, but I haven't seen her in a year and a half and feel kind of guilty -- like, I should concentrate on making sure she has a good time rather than on being the curmudgeonly smarty pants I usually am when I see her.

Maybe I'll have some touristy pics to post ('cuz it's an open secret where I'm located, and there's ... almost too much touristy stuff to do here, which I normally avoid like the plague ...)

Here are a few quotes and links for you to ponder in the meantime:

One of the crucial issues for some of us postacademics, as well for many college students trying to decide on a major, is whether higher education should be primarily training and preparation for a career or an indulgence of The Great Intangible Life of the Mind.  John Adams put it this way: "There are two types of education. One should teach us how to make a living. And the other how to live." Sadly, a Ph.D. in the humanities or social sciences these days moves us very little towards either of those goals.

While we're quoting John Adams (somebody posted a quote over in the comments at 100 Reasons, which is what got me started), here's another one that seems especially profound given our current political climate: "Democracy never lasts long. It soon wastes, exhausts and murders itself. There was never a democracy that did not commit suicide.”

Scary, huh? Especially when you read an article like this about how money is infecting the democratic process. If you don't follow politics that closely, you may be surprised to know that the current Republican anti-tax fanaticism is relatively new. From the Rolling Stone article:


Today, Reagan may be lionized as a tax abolitionist, says Alan Simpson, a former Republican senator and friend of the president, but that's not true to his record. "Reagan raised taxes 11 times in eight years!"

But Reagan wound up sowing the seed of our current gridlock when he gave his blessing to what Simpson calls a "nefarious organization" – Americans for Tax Reform. Headed by Grover Norquist, a man Stockman blasts as a "fiscal terrorist," the group originally set out to prevent Congress from backsliding on the 1986 tax reforms. But Norquist's instrument for enforcement – an anti-tax pledge signed by GOP lawmakers – quickly evolved into a powerful weapon designed to shift the tax burden away from the rich. George H.W. Bush won the GOP presidential nomination in 1988 in large part because he signed Norquist's "no taxes" pledge. Once in office, however, Bush moved to bring down the soaring federal deficit by hiking the top tax rate to 31 percent and adding surtaxes for yachts, jets and luxury sedans. "He had courage to take action when we needed it," says Paul O'Neill, who served as Treasury secretary under George W. Bush.

The tax hike helped the economy – and many credit it with setting up the great economic expansion of the 1990s. But it cost Bush his job in the 1992 election – a defeat that only served to strengthen Norquist's standing among GOP insurgents. "The story of Bush losing," Norquist says now, "is a reminder to politicians that this is a pledge you don't break." What was once just another campaign promise, rejected by a fiscal conservative like Bob Dole, was transformed into a political blood oath – a litmus test of true Republicanism that few candidates dare refuse. 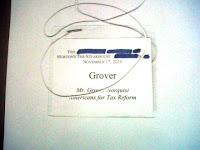 John Adams had this to say: “All the perplexities, confusion, and distress in America arise, not from want of honor or virtue, but from the downright ignorance of the nature of coin, credit, and circulation.” It's nothing new that there's always been a marriage between money and power, here as elsewhere in the world, now as at other times throughout history. But for those of us who covet neither of these things in any great extreme and ultimately value honor and virtue more than money or power, I think it's hard to imagine -- to even fathom -- how deep and abiding that marriage remains.
Posted by recent Ph.D. at 4:08 PM