"adjuncting i give up"

At least one of you found this blog by searching that phrase today. As JC has said many times over at From Grad School to Happiness:

You are not alone.

Whoever you are, the way you phrased that says a lot. As "adjuncting" displaces and diminishes the subject of the sentence "i," so does the hopelessness and frustration of the job itself overwhelm so many of the people who find themselves doing it semester after semester after semester -- without ever the promise that you will be rehired the next semester, without enough pay to cover your expenses, without any possibility of progress in your chosen profession no matter how good your work nor how long and outstanding your commitment.

To say "adjuncting i give up" is not the same as "I give up adjuncting." The latter suggests certainty and affirmation, the act of "giving up" by cutting your ties, walking away,  and moving on, leaving "adjuncting" behind. The former, the phrase you searched, instead suggests that "I give up" not just adjuncting but hope. The object dominates the subject, removing its agency. The thing you want to give up won't let you let it go. After all, you've given so much to it already -- so much of your time, your effort, your passion, your life. The only thing to give up, it seems, is more of yourself.

OK. Enough close reading. You're not alone is what I wanted to say. Adjuncting does this to people, you see. Lots of people. But you'd never know because no one talks about it inside academe. You have to do a Google search to find out that your colleagues down the hall are feeling the same way. And when they do leave, as a great many of them do one way or another, with or without the Ph.D., you never see or hear from them again. You don't know what they end up doing with their lives or what finally pushed them over the edge and out of academe. You just know they're gone. And now you feel like it's your turn, but you don't know exactly how to make your break or when or who to talk to ... and that's how you found yourself here.

So, no, you are not alone. And, yes, it is OK to give up and walk away. Because once you do, you aren't giving up anymore. You're going somewhere again. You may not know where, but at least you will have freed yourself from the trap that is academe. 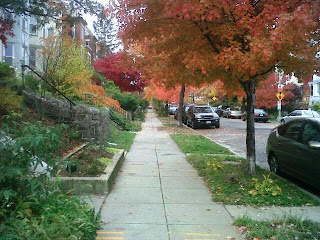 Isn't that a pretty path? I took the picture walking to work this morning. Here's another, just a few yards further down the same street: 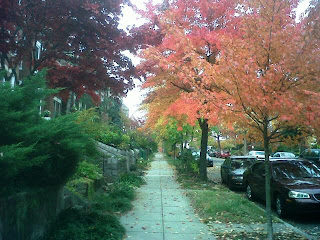 Once you start considering where you might go, once you take the first few steps, the path itself changes. How do you even know what awaits you until you do give up on expecting adjuncting to ever offer you anything more than what it currently does?

And if these pictures aren't enough to inspire you to walk away, if you're new here and/or maybe missed these a few months back, here are a few older posts on the subject that haven't been getting much traffic lately:

We Are All Waldo

Academic Hierarchies: Let the Numbers Speak for Themselves (Part 1)

Academic Hierarchies: Let the Numbers Speak for Themselves (Part 2)

And lastly, here's a song: