Rediscovering Mornings (Or, Yoga on a Day of Short Posts)

Now that the Congressman's gone, I'll write what I was going to originally. Namely, I finally decided to give in to the kittehs and get up to feed them at 5:30 AM (instead of what I usually do -- put up with their annoying whining, sitting on my chest, and attacking each other ON THE BED while I'm trying to finish sleeping). Getting up this early, I was able to get to yoga (which I've been woefully neglecting) at 6:30 and still get back home by 8:00, which is when I usually get up, in order to shower etc. and get to the office by 10:00.

Morning yoga was awesome. First, it was awesome to go for the second time in a week (I went Saturday, and it's been a couple months since I've gone more than once a week). I get regular exercise walking to and from work -- just under 2 miles each way -- but it's not the same as yoga. Second, mornings just as the sun is coming up are cool and peaceful and quiet compared to the rest of the day, so walking over to the yoga studio (and back) was awesome. Third, not that many people are crazy enough to haul a$$ out of bed at 5:30 AM in order to get some yoga in before work, so the class was small, which was awesome. On weeknights and weekends, the classes can be so crowded that you have to be careful not to whack your neighbor with an arm when you're doing sun salutations

or kick someone behind you when you roll over from shoulder stand to plow pose.
Fourth, I will totally never be able to do this

crazy, amazing cross between a headstand and a handstand if I don't practice!! (Hey, I may never be able to do it anyway, but it's nice to have goals -- both short-term, like getting up early a few days a week to GO to yoga in the first place, AND long-term ones...)

And, lastly, yoga is just plain awesome, inside and out, and it's worth getting up early to do. 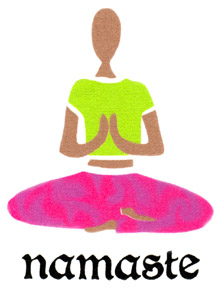